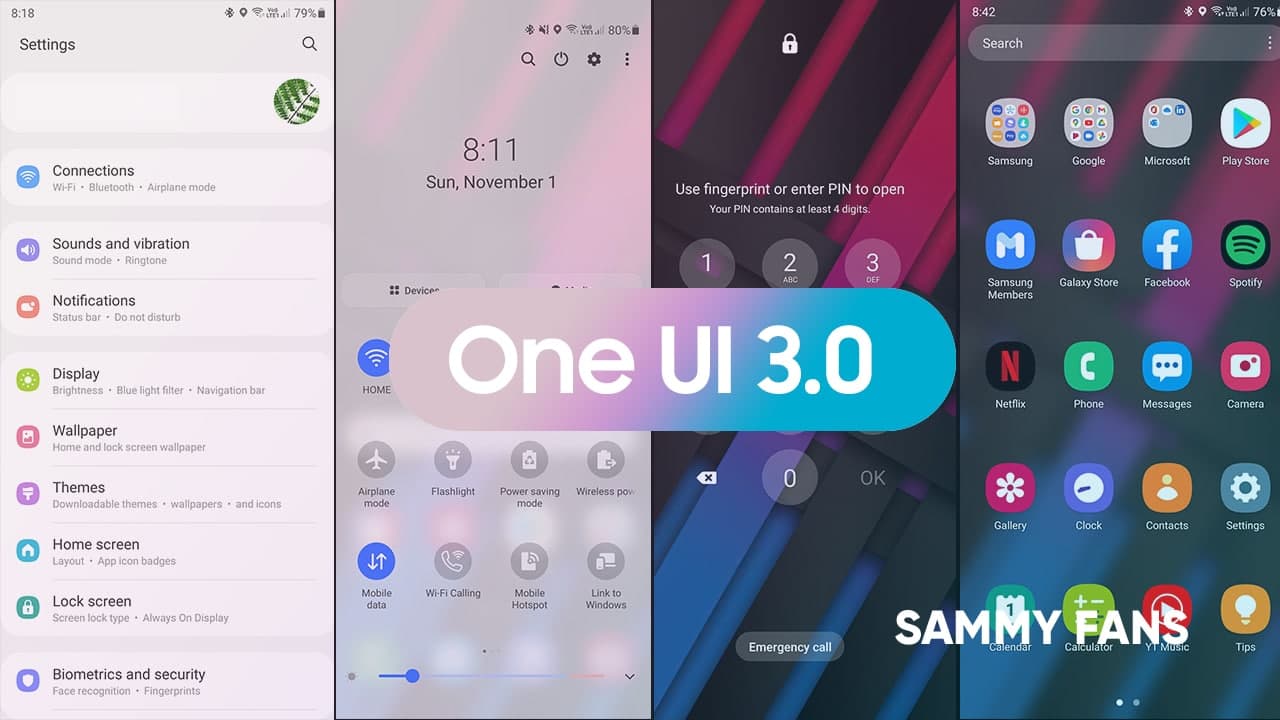 Samsung introduced One UI at SDC 2018, a new mobile software skin based on Android OS, designed for Samsung smartphone and works on the philosophy of “focus on what matters most”.

The South Korean tech giant made some big changes in the One UI user experience compared to the predecessor “Samsung Experience” and brought simplicity on performing tasks under reach your hand’s thumb.

Including its initial version, Samsung has released six One UI versions since its launch:

With these One UI versions, Samsung has improved the overall user experience, improved One UI’s system performance, and added new features. 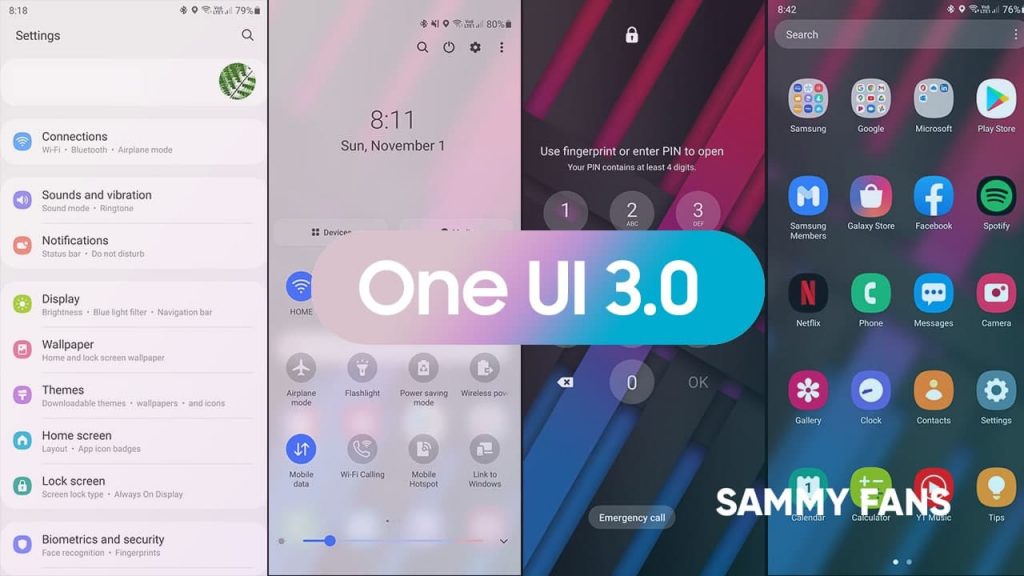 One UI 3.0 is based on Android 11 and brings you some of the features from the Android ecosystem.

One UI 3.0 Features and Changes that we’ve discussed in this article:

Once you update your smartphone to One UI 3.0, the lock screen will be the first door that you need to unlock before moving to the world of new user interface changes.

But once you reach the lock screen, you’ll start noticing the changes in the user interface by yourself. The lock screen now has smoother fingerprint animation and a new lock icon hovers on the top center.

UI of the unlock method such as PIN UI is also changed compared to One UI 2.5 and comes with a dialer with round backgrounds that look very good.

Furthermore, the shortcut on the left and the right side has been grayed out and the respective apps open with a brand new animation from each side.

Talking of changes, how can we forget the important part of the user interface that you access most of the time in a single day.

The new effect in the user interface may seem little but it definitely improves the user experience.

Home Screen appears the same but when you open the App Drawer and Recent Apps, the new transparent background (Similar to the notification) will also be found here and more visible. Not only that, it helps you to view the apps and recent apps section better than before.

Moving on, Samsung has added some new functionality to the finder, which includes your recent apps, suggests, files in storage, and recent searches in different cards.

One of the major changes in the One UI 3.0 includes the Notifications and Quick Settings panel overhaul.

The background of the Quick Settings panel has a semi-transparent blurred background, which increases the overall viewing experience and better highlights the quick setting buttons.

The Media and Devices options are now placed above the buttons. While, the search, power button, settings, and more menu icons are moved to the top right corner of the screen. Also, the date is moved to the center area. To mention, the edit button option has also received some changes.

Samsung has completely redesigned the volume control panel and each control for Ring, Media, Notifications, and System and now appears “Vertically” instead of Horizontally in One UI 2.5.

The background of the volume controls has the same transparent and blurred finishing as the quick settings panel. It kinda looks cool.

The Setting interface and its elements are one of the cleanest and nicely designed menu in any Android smartphones. The One UI 3.0 brings a redesigned and restructured settings app menu, which looks even better than before.

Talking first about the Samsung Account menu card, which has a bigger view of details such name, email, and profile avatar.

Coming to the menu items, the icons in the menu brings better and improved settings icons, and most importantly, a new color palette that looks way better than One UI 2.

Moreover, the subtle change in the spotlight feature is also noticeable and separated with dots instead of dashes (in One UI 2).

The Always-on Display is also improved with One UI 3.0 and now offers better AOD features.

The latest implementations in the AOD section bring new clock styles that now supports animated GIFs with some tiny customizations. Once you lock the phone, the GIF starts to play for a limited time.

You can also set an image from Gallery or download AOD themes from the themes store.

With One UI 3.0, Samsung has given this lock screen feature a big overhaul and when you tap on the clock, you now have the option to swipe up or down. Once, you do this, there’s a whole screen with different cards will pop-up to provide a better view of the widget information than it was in the One UI 2.5.

One UI 3.0 allows you to set how notifications will show as they arrive. In the notification panel, notifications are grouped to make them easier for you to read at glance.

Ongoing conversations in your chat and messaging apps are shown on top so you can get them quickly. Alert notifications will give you an indication when they arrive. Silent notifications provide useful information without interrupting you.

To make the notification viewing experience simpler, One UI 3.0 now allows you to select between Brief and Detailed notification styles:

Brief: It’ll allow you to see text-only pop-up notification details. You’ll have the option to select a specific app that will be shown as brief. Moreover, you select the color of the notification by a keyword and even show while the screen is off.

Detailed: The Detailed view will appear in the notification bar, which is seen as usual.

Notification History: With Android 11, Google introduced the new Android notification history manager, which now keeps the history of your notification.

This feature is now implemented in the One UI 3.0 and allows users to keep the history of recent and snoozed notifications.

Long press on an application option is very useful to open a set of features to view a notification or select from a range of services related to the respective app. This feature has been revamped with One UI 3.0.

The Device Care feature is in the Settings is now renamed to “Battery and device care”. Both Battery and Storage screen also received some noticeable changes in their features respectively.

Video enhancer improves the image quality of your videos to enjoy brighter and more vivid colors. This feature supports Samsung’s native video player, YouTube, and Netflix and on One UI 3.0, it supports Google Play Movies & TV.

Also, users can turn on or off an individual app by using the Video Enhancer feature, using the switches.

Yes, we’ve to talk about the Samsung Gallery app, and One UI 3.0 has brought new changes in this photo or video viewing application.

The options from the Gallery app user interface is now restructured. Beginning from the top, the options previously had Videos, Favorites, Locations, and Suggested sections to sort out images and videos in respective categories.

In One UI 3.0, these options are gone but only from the top and moved to the bottom bar inside the new hamburger icon menu alongside Trash and Settings features. Also, the same restructuring has been made throughout the Gallery app.

You can also choose a layout on how to show caller info when the person has a profile picture.

Recycle Bin for Phone and Messages:

One of the most important features, Trash is now added to the Phone and Messages app. Once you delete a message or a contact it’ll go to their Trash respectively and it’ll stay there for at least 30 days before it deletes permanently.

Samsung is currently rolling out One UI 3.0 for Galaxy S20 and Galaxy Note 20 series devices in different markets and the company are also preparing to rollout this latest One UI version to more devices.

If you want to know the list of eligible devices and the latest news regarding the One UI 3.0, take a look at the articles linked below.

the authorChanakya Shrutam
Chanakya Shrutam is the lead writer and Editor-in-chief at Sammyfans.com. He is experienced in the field of App development for Android, Machine learning, and graphics designing. Most of the time he writes news articles and stays in front of his computer but he also takes some time off to practice calligraphy with new fountain pens.
All posts byChanakya Shrutam
show 2 comments