Last year, Samsung remained on the top spot in terms of global smartphone market shipments till the third quarter. But, Apple snatched the crown from Samsung in the fourth quarter of 2021 because of the strong demand for the 5G supported iPhone 12 series.

Moving forward, the South Korean tech giant unveiled its latest Galaxy S21 flagship series ahead of the previous launch periods as an effort to get back its top spot in the global smartphone market. At the same time, the company introduced several mid-range phones that having premium features.

As a result, it looks like the efforts of Samsung giving a significant outcome as it surpassed Apple by shipping 76.5 million units and secured a huge 22% of the total market share. Besides, the Cupertino-based company slipped to its real place (AKA second), shipped 52.4 million iPhones, and captured a 15% share.

After these top 2 smartphone vendors, there are three Chinese brands that have listed in the top five. Xiaomi impressively gained its best single-quarter performance ever, with 62% growth. However, the company sold 49.0 million units with a 14% market share.

Oppo and Vivo completed the top five, shipping 37.6 million units and 36.0 million units respectively. Huawei, which no longer includes Honor, is now in seventh place with 18.6 million units, as the former world number one remains shackled by US sanctions. 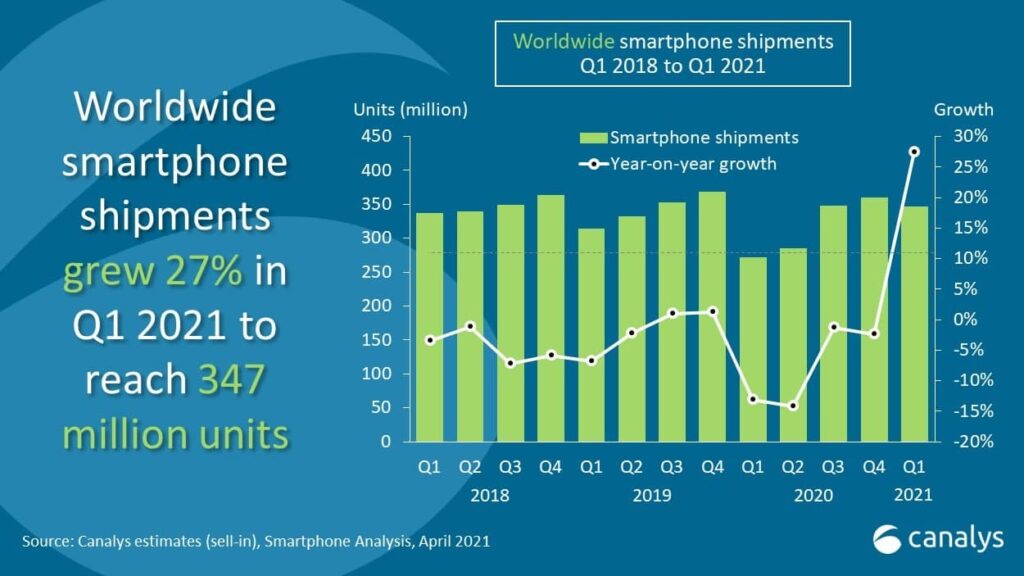 “In addition to great product value, Xiaomi is now also making strides to recruit local talent, become more channel-friendly, and lead in high-end innovation, as seen with the Mi 11 Ultra and its recent foldable, the Mi Mix Fold. Its competitors offer superior channel margin, but Xiaomi’s sheer volume actually gives distributors a better opportunity to make money than rival brands. But the race is not over.”

He added – “Oppo and Vivo are hot on its heels, and are positioning in the mid-range in many regions to box Xiaomi in at the low end. Honor is also a looming threat. It has already struck supply chain deals and is now signing distribution agreements to re-enter several markets in the second half of 2021. Xiaomi is leading the pack, but the race has only just started.”