Last month, Samsung launched an affordable M series smartphone – Galaxy M12 in Vietnam. Now, the company is preparing to expand the availability of this device in more countries and regions. Besides, Samsung India has already started teasing this handset through Amazon and several social media platforms.

Just like the Galaxy A32 4G, the Korean tech giant is offering this affordable smartphone in India with a 6.5-inch PLS TFT LCD screen with HD+ resolution and a 90Hz refresh rate. It makes the Galaxy M12 the cheapest handset offering from Samsung featuring a higher refresh rate panel. 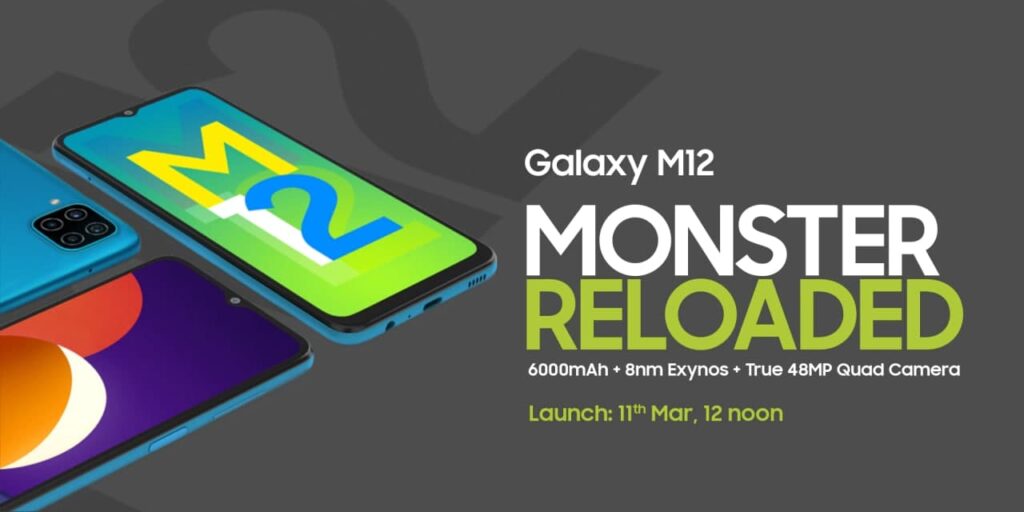 In the camera department, the Galaxy M12 comes with a quad rear camera setup including a 48MP primary camera, a 5MP ultra-wide camera, a 2MP depth sensor, and a 2MP macro sensor. At the front, it has an 8MP camera for selfies.

Under its hood, the Galaxy M12 has an 8nm process-based Exynos 850 processor supported by 4GB RAM and 64GB internal storage. However, it is a budget phone, so it will be interesting to see how it will perform with its higher refresh rate.

Apart from this, the Korean tech giant is shipping the Galaxy M12 pre-installed with Android 11-based One UI 3.0/One UI 3.1. It packs an impressive 6000mAh battery for all-day battery backup along with up to 15W fast charging. Moreover, it also features a fingerprint scanner on the power button for biometric authentication, USB Type-C port, GPS, 3.5mm headphone jack, Wi-Fi, and more.

Samsung Galaxy M12 will be available in three different color options including Black, Blue, and Green. According to the official info, this phone will be launched in India on March 11, 2021, at 12PM IST. In addition, it will be available to purchase from Amazon and Samsung Shop.