Samsung One UI 4.1 is the latest version of its Android 12-based custom skin for Galaxy devices. Over the parent One UI 4.0, the 4.1 iteration of One UI equips significant performance improvements as well as additional features as part of further enhancing the user experiences. However, we are conducting a Home Screen Icons comparison.

Samsung’s bringing powerful multitasking capabilities with the Galaxy devices such as the Edge Panel and bottom bar gestures. Meanwhile, the Home Screen is the most useful function on your smartphone as you access various apps and services. Here, we are going to compare One UI 4.1 Home Screen Icons with every rival.

Android 12 is the latest “stable” version of Google’s mobile platform. Almost all the OEMs are providing the Android 12-based skins to their devices. However, we have the home screen icons appearance of the upcoming Android 13 OS, thanks to the Developer Preview program.

The Pixel phones feature Pixel Launcher for the home screen settings and customization. Talking about home screen icons, the Android 13 offers circular icons on the home screen above the Google Search widget. Have a look at it in the screenshot mentioned below.

While Apple is going to introduce the 16th generation of the iOS operating system for its iPhones, iOS 15 is powering almost all iPhones globally. On the home screen, you can find the favorites apps tray with a transparent background appearance, while the icons are placed in a comparatively bigger form factor – squarish with rounded corners.

OnePlus introduced the Android OS 12-based OxygenOS 12 for its devices last year. This custom skin is said to have the overall UI and features the same as the stock OS, which reflects on the home screen icons as well. In OxygenOS 12, devices have circular icons with a neat and clean appearance, check out below.

MIUI 13 is yet another custom Android 12 skin, developed by Chinese phone maker – Xiaomi. Like Huawei, most of the so-called useful yet futuristic features are limited for consumers in China. Coming back to the topic, the MIUI 13 has the same home screen icons as the MIUI 12.5, which we can say is badly copied by Apple iOS.

ColorOS 12 is also based on the Android 12 operating system, introduced by Google. Similar to the Google Pixel smartphones, the ColorOS 12 offers circular icons on the home screen, while they are not entirely circular. At the same time, Oppo let users heavily customize the user interface.

Although Huawei claims to be using its own grown HarmonyOS software on almost all devices, its availability has not crossed China’s boundaries. On the other side, Global Huawei devices are nowadays receiving the HarmonyOS-inspired skin called EMUI 12, which is reportedly based on the Android operating system.

Looks a lot similar to the iOS and One UI, the EMUI 12’s homescreen icons have a squarish form factor alongside rounded corners. By default, the apps’ arrangement is set to 4 icons in the favorites tray, while the above side icons feature their title as well.

One UI 4.1 is based on Google’s Android 12 operating system, bringing a unique experience to the Galaxy consumers. We’ve explored almost all the new features and changes, well, here, we’re talking about the home screen icons of the One UI 4.1 software system.

At the bottom, the One UI Home launcher brings a favorites tray, where you can put your most-used apps. Above the favorites tray, you can place your important apps such as social media, and banking/payments apps, which have their titles too.

The overall design of the One UI 4.1’s home screen icons is eye-catching, while talking about the form factor, they are neither wholly squarish nor circular. In addition, you can customize the home screen icons as per your need in order to take the most of your Galaxy.

Nothing Phone 1 vs Samsung Galaxy A53: Specs, Price, Software Support

One UI 5.0 vs OxygenOS 13: Comparing Quick Settings interface of rivals 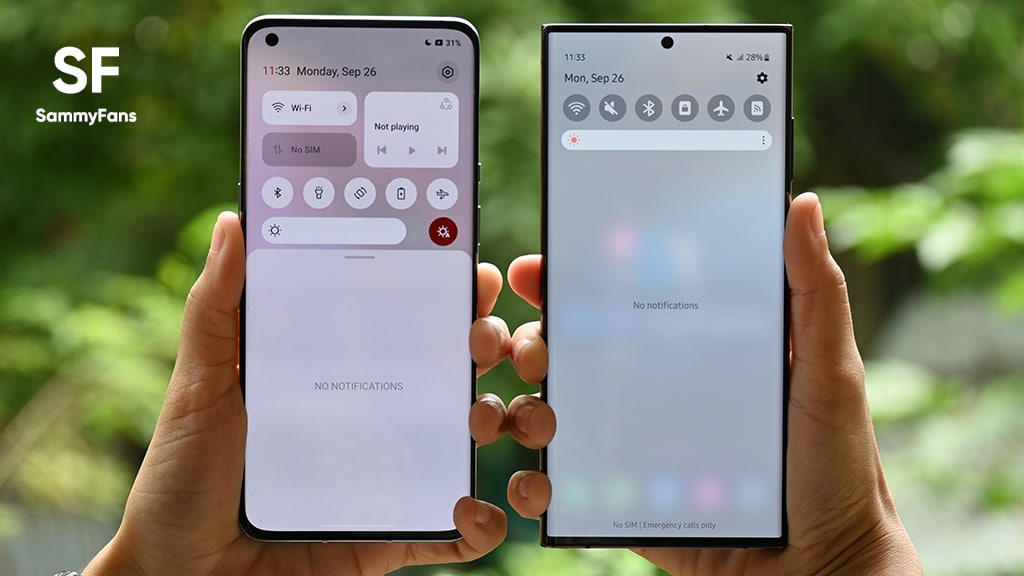 One UI 5.0 and OxygenOS 13 are the newest custom skins based on Android 13. As Android is open source so smartphone makers can customize it to their needs and build it as the basis for their custom software skin like Samsung One UI and OnePlus OxygenOS. So, we are going to compare the quick settings of OxygenOS 13 and One Ui 5, but before that let us know what is Quick Settings.

Quick Settings! It is a space where you can directly access the most helpful features of your smartphone and control them easily with a single click. On the Quick Settings panel, you can see several ‘tap to enable’ features, time, date, power off Menu, notification panel, and more. 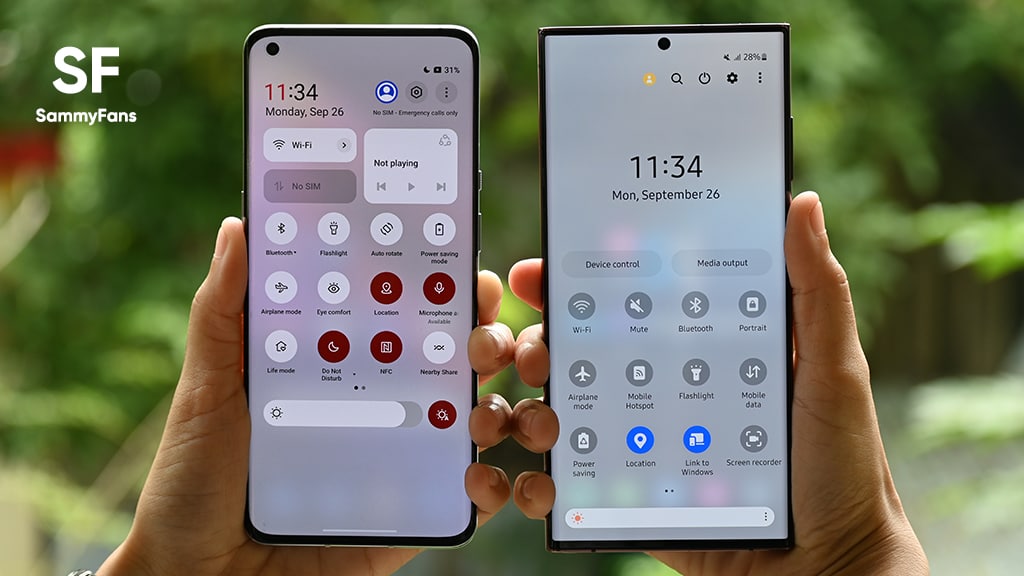 Let’s begin the One UI 5.0 vs OxygenOS 13 comparison of Quick Settings.

With One UI 5.0 software, the company applied a Color Palette so Galaxy users can have a better idea of Android 13’s powerful dynamic theming feature, however, there are no layout changes have been made.

We can access the primary toggle of One UI 5.0’s quick settings by swiping down once from the home screen. By default, there is a pack of 6 toggles that cannot be reduced or increased, meanwhile, we can edit them as per our requirement.

When expanded, the Quick Settings page shows 12 toggles with names in a 4×3 layout For more toggles, we can swipe left. Above the toggle, there are Device Control and Media Output buttons. 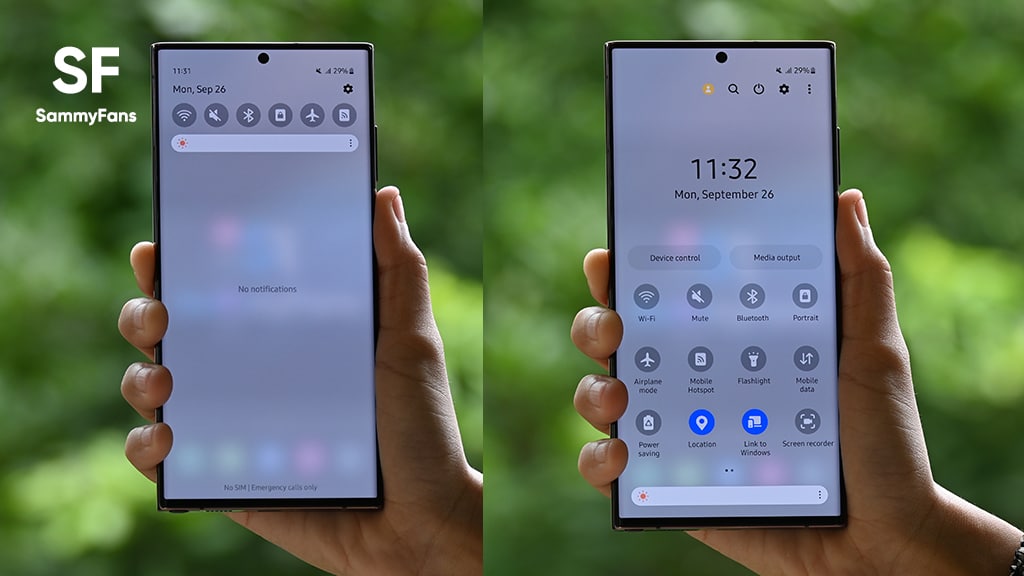 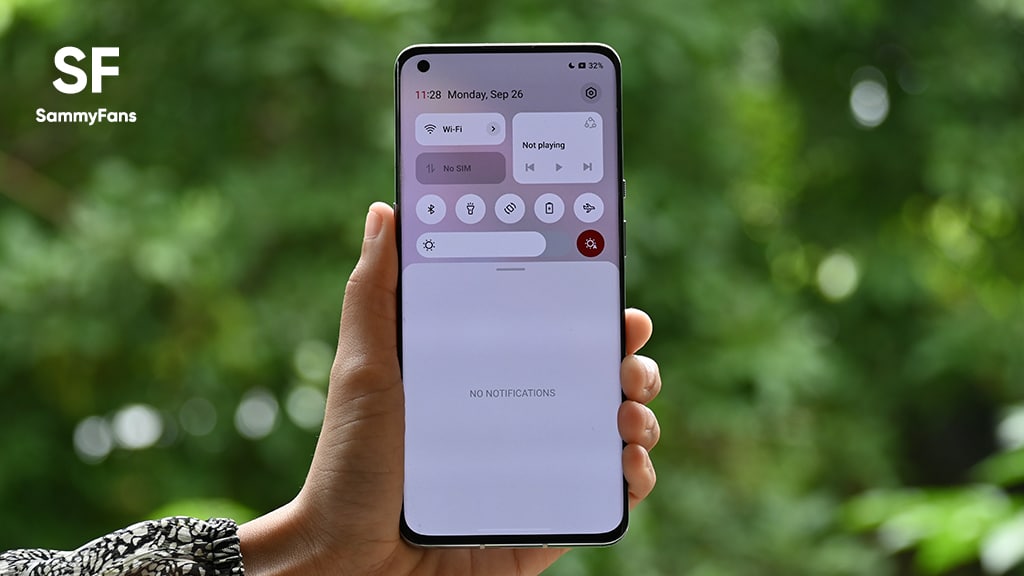 With a single swipe down on the home screen, you can access all three sections. At the top, there are the Media and Connectivity sections, side by side. While the other quick settings switches and the brightness slider are at the bottom.

After expanding the panel, more toggles are visible to you. You can edit all the toggles at your convenience.

The layout of the quick settings of Samsung One UI 5.0 and OnePlus OxygenOS is different, the rest of the features are the same. Another thing to note is that once you sweep, the OnePlus takes up more space than the Samsung, which shows the quick settings. Samsung covers 1/4 part of the entire screen, while OnePlus covers little less than half the screen. 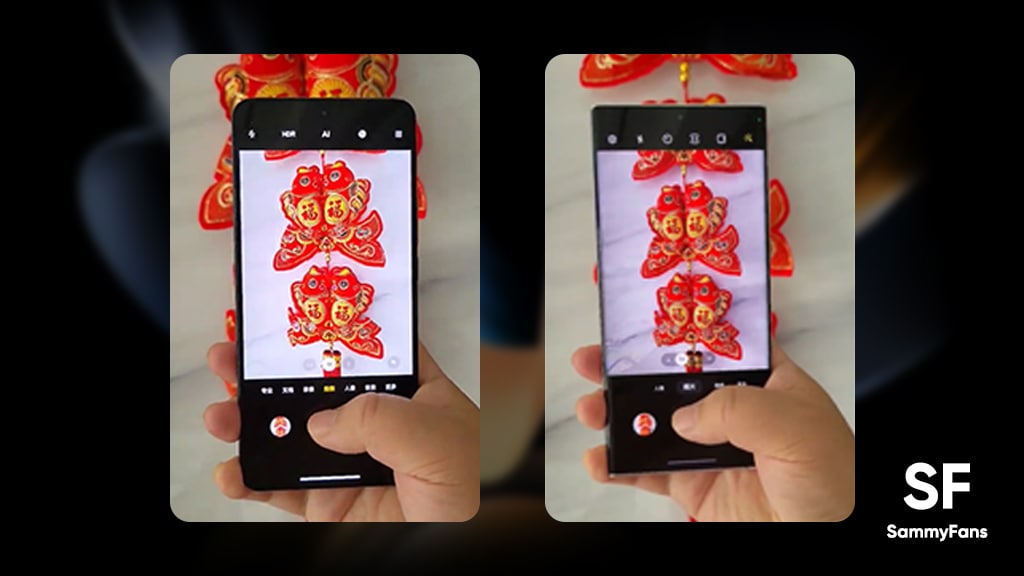 Galaxy S23 Ultra will be the next big hit by Samsung with a powerful mobile camera atop. Meanwhile, seems like, competition is rapidly increasing in the camera smartphone segment as a personal review shared by a tipster claims Redmi K50 Ultra beats Galaxy S22 Ultra in terms of camera shutter lag (speed).

According to a video shared by IceUniverse, Xiaomi’s Redmi K50 Ultra smartphone beats the Samsung Galaxy S22 Ultra, when it comes to shutter lag. To be mentioned, the former packs an HM6 image sensor, while the latter is powered by ISOCELL HM3.

As shown in the video, Ice repeatedly tapped the camera shutter button of the Redmi K50 Ultra smartphone, and it continues capturing images per tap. On the other hand, when Ice used the Galaxy S22 Ultra and followed the same shutter taps, it just got defeated by its Chinese rival.

p1 K50 Ultra p2 S22 Ultra
I think the K50 Ultra is better than the S22 Ultra when it comes to snapshots, plus the Samsung shutter lag issue is a stubborn one. pic.twitter.com/1XEBVMF6Wi

The video can easily disappoint any Samsung consumer as we can see how the Galaxy S22 Ultra gets failed when the user continuously taps the shutter button in a very short delay. The camera test video shows Galaxy S22 Ultra shutter speed recorded in slow motion, you can now understand the level of failure.

There are two main factors that affected the shutter lag including different image sensors and system on chip (processor). While the Galaxy S22 Ultra uses the Snapdragon 8 Gen 1 chip, the Redmi K50 Ultra is powered by its overclocked version – Snapdragon 8 Plus Gen 1.

We saw Qualcomm is ready to give orders for the next-gen Snapdragon flagship processor to TSMC instead of Samsung. The main reason is that the 4nm process technology of Samsung got failed this time, as both Exynos 2200 and Snapdragon 8 Gen 1 reportedly have multiple issues.

As Chinese smartphone manufacturers are coming to the contest, Samsung needs to work on its development and innovations. Ahead of creating new ones, the Korean tech giant should fix all the issues with basic features that consumers use the most like camera. 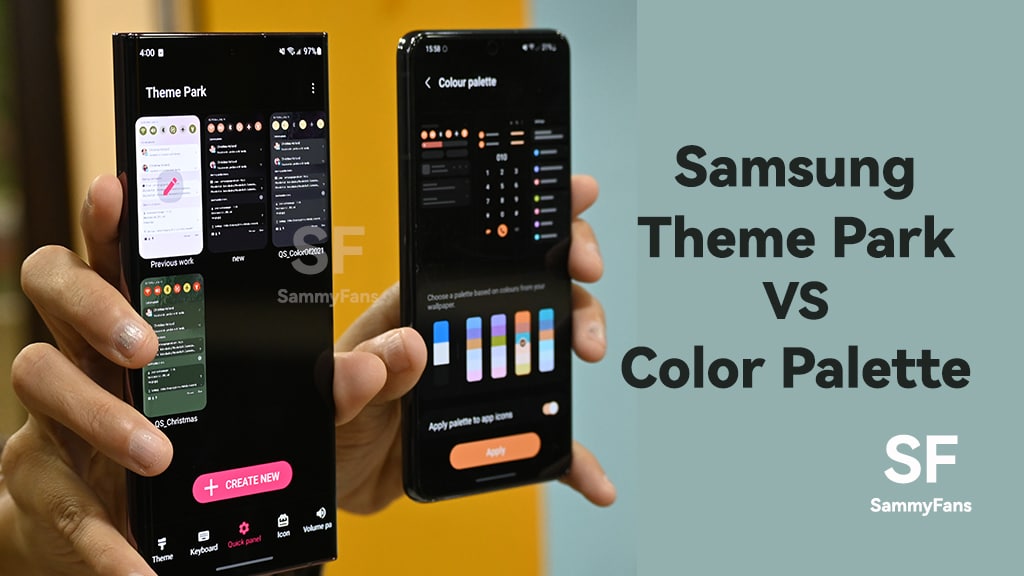 Customization! That’s what Samsung smartphones are famous for. Galaxy devices have all the customization options you need on your smartphone. From the Lock screen to the Home screen, Quick settings panel, and volume panel, you can personalize your phone in every possible aspect.

However, what comes first in our mind when it comes to customization is theming. Android 12-based One UI 4.0 and One UI 4.1 comes with a Color palette which enables theming on the phone based on the wallpaper we set.

But much before Google released this feature through Android 12, Samsung’s Good Lock’s Theme Park presented a more powerful theming engine for Galaxy devices. Samsung understands the uses much before Google did and offered what we want when it comes to color customization.

In this article, we are going to compare Samsung Theme Park and Color Palette. Let’s see who better themes your Galaxy phone.

Samsung Color Palette works when you set a new wallpaper or theme to your phone’s home screen or lock screen. As soon as you apply a new wallpaper, you got four different color combinations along with the system default theme.

You can also apply this color palette theme to app icons if you desired to do so. However, do note that it is only applicable to the Samsung apps, Google and other third-party apps will remain the same.

This color palette page also shows the three different sections where the color palette will be applied. These include the Quick settings panel, Samsung dialer, and Settings menu. Apart from these, all system applications get some sort of colors but it did not apply throughout.

Now moving to Samsung Theme Park. This is a very powerful customization engine, here we can create our own theme, keyboard, quick pane, icons, as well as volume panel.

When you tap Create new, it takes you to the current wallpaper which is set on the home and when tapping Next, you will get so many different sections where you can customize the themes. You get the Lock screen customization options, icons, and keyboards.

The most interesting thing is customizing the quick panel. You can personalize every element – you can change the color of the background, toggles, notifications, and content, as well as change transparency. 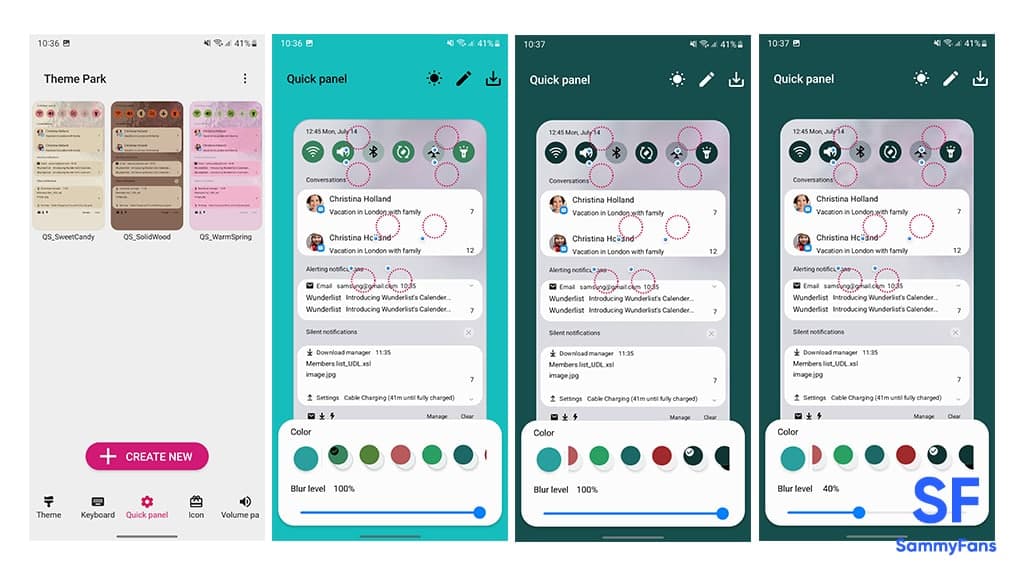 On Samsung Color Palette, you can apply four different color combinations whereas, on Samsung Theme Park, you get multiple colors. With Theme Park, you can customize your phone in many more sections than the Color palette.

Also, when you customise app icons using Theme Park, unlike Color Palette, the change applies to all system apps, even third-party. Thus, it’s clear that Theme Park is way better than the Color Palette.