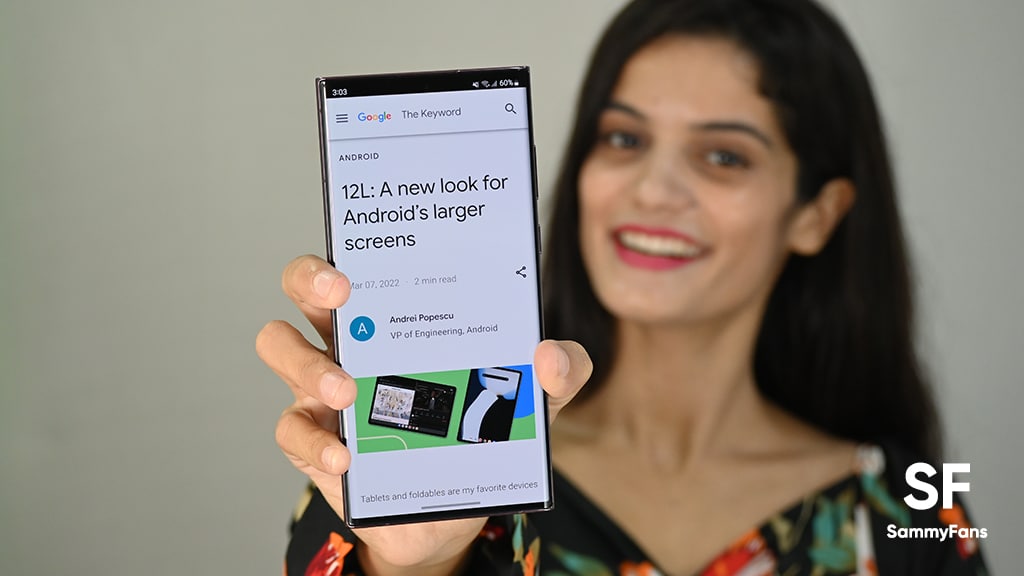 Samsung has started releasing a new update for the Galaxy Themes app to improve performance. Identified via version 5.2.05.4, the latest update of the Galaxy Themes brings Android 12L-based One  UI 4.1.1 support.

With this latest update, the company has again confirmed that the One UI 4.1.1 will be based on Android 12L. In addition to Android 12L support, the new update of Galaxy Themes brings some general improvements for better stability and usability of the app.

According to the changelog, this update does not come with any new features, themes, or additional functionality but you can see some minor improvements in its core functions which will further enhance the performance of the application.

The newest update of the Galaxy Themes app arrives with an installation package size of 19.33 MB. To be mentioned, the compatibility of this update is only for Galaxy devices running Android 12L-based One UI 4.1.1 or below.

Users of Galaxy devices can install the latest via Galaxy Store or download it directly from the link mentioned below.

In early June 2022, Samsung released a new update for the Good Lock module’s One Hand Operations + and confirmed that the One UI 4.1.1 update will be based on Android 12L. The company has started releasing One UI 4.1.1 support to stocks apps, Galaxy Themes is one of them.

The Korean tech giant will release the One UI 4.1.1 alongside the Galaxy Z Fold 4 and Galaxy Z Flip 4 launch in the next few months. Hence, you may be wondering whether your Samsung device is eligible for the new One UI 4.1.1 or not here. To know more information, stay tuned with us. 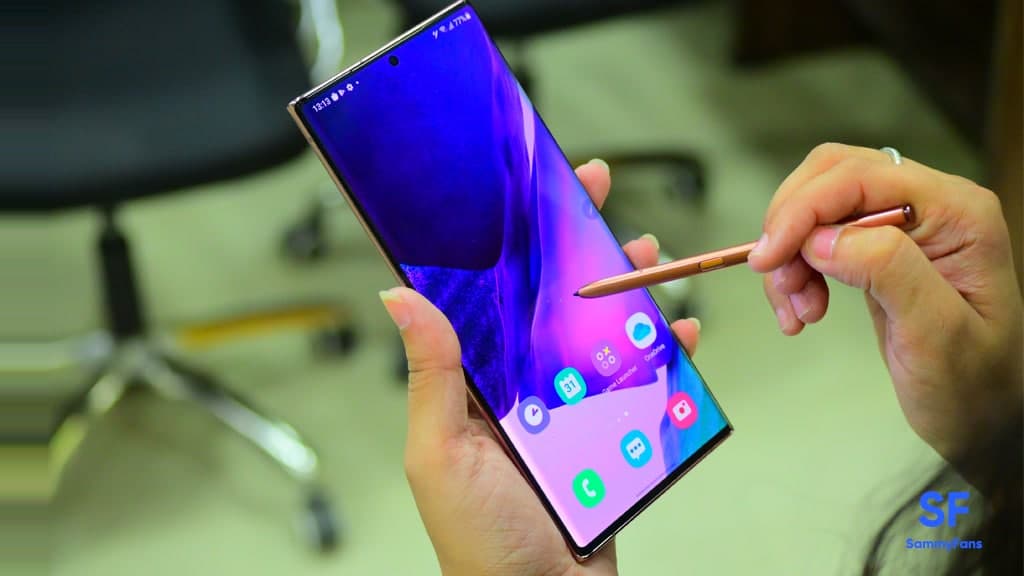 Like Google, Samsung also has its own Phone application, which allows Galaxy device users to make calls. It is the default app installed in every Samsung smartphone. With the app, you can answer the call and see which number is calling you. If the relevant number is saved in your address book, you can view the contact’s name and the photo assigned to it.

Just think, if your smartphone doesn’t have a phone application, can you call your device a smartphone? Fine, you can’t say phone, Phone! Therefore, the phone application is a very important service for any smartphone user. So, keep updating it to the newest version to experience the latest features and changes.

Samsung Phone is getting a new update with version 13.0.00.11 and updated package size of 26.74MB. The latest update brings bug fixes to enhance app performance.

Samsung is releasing a new update for the Samsung Phone with version 13.1.22.67, which comes with regular fixes to improve the stability and usability of the app. Read more here.

Samsung is releasing a new update for the Phone app with version 13.1.22.51 update. The latest update brings bug fixes to improve app stability and performance.

Samsung is releasing a new update for a Phone app, which brings common improvements for a better user experience. The update comes with version number 13.1.22.51 and an updated package size of 25.8MB. Read more here…

Samsung is releasing a new update for a Phone app, which brings common improvements for a better user experience. The update comes with version number 13.1.22.29 and an updated package size of 25.77MB.

Samsung Phone (Call) app is getting a new update with version 13.2.00.20 and weighing 29.03 MB. The newest update brings some common changes to enhance stability.

Samsung is releasing a new update for Samsung Phone with version 13.0.00.120 and weighing 28.91 MB. The latest update brings some general improvements to enhance performance.

Users can download the update from the link mentioned below.

Samsung Phone is receiving a new update with version 13.0.00.110 and an updated package size of 28.86 MB. The latest update comes with some common improvements to enhance performance.

Users can download the update from the link mentioned below.

Samsung has begun to rollout another beta update for Samsung Phone with version number 12.7.10.0and weighing 24.57 MB. The latest update brings fixes for bug-related issues in order to bring better stability to the application.

Note: This version is compatible with One UI 3.1 or below.

Samsung releasing a new update for the native Phone app, carrying build number 13.0.05.12. This new application update comes without a changelog but should bring improvements to the features and functionalities.

Note: This version may not be compatible with One UI 3.1 or below.

Samsung has now started to roll out a new update in the Samsung Phone app which comes with version 12.7.06.1 and weighs 17.38 MB. This update brings regular improvements and changes in the application for better functionality and stability. 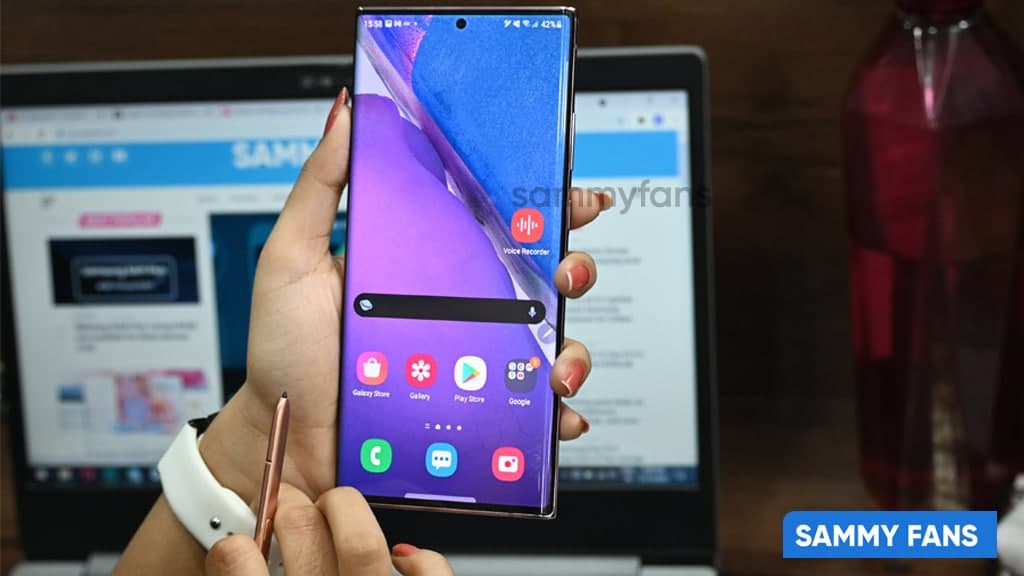 Android Auto is a well-known companion that allows you to use some of your smartphone’s features while driving a compatible car. The platform mainly works on Google Assistant so you can operate features by just saying “Hey Google.”

The Galaxy S22 series, which was released back in February this year, reportedly has blank screen issues with the Android Auto service. Consumers reported about the issue on multiple platforms including Google Community and social.

Most of the affected devices reported having blank display issues in which the display of the device gets vacant and doesn’t show any app while continuing to present bottom bar controls. An Android Auto team member confirmed that Google has “implemented a fix” that is present in Android Auto 7.7 and newer. 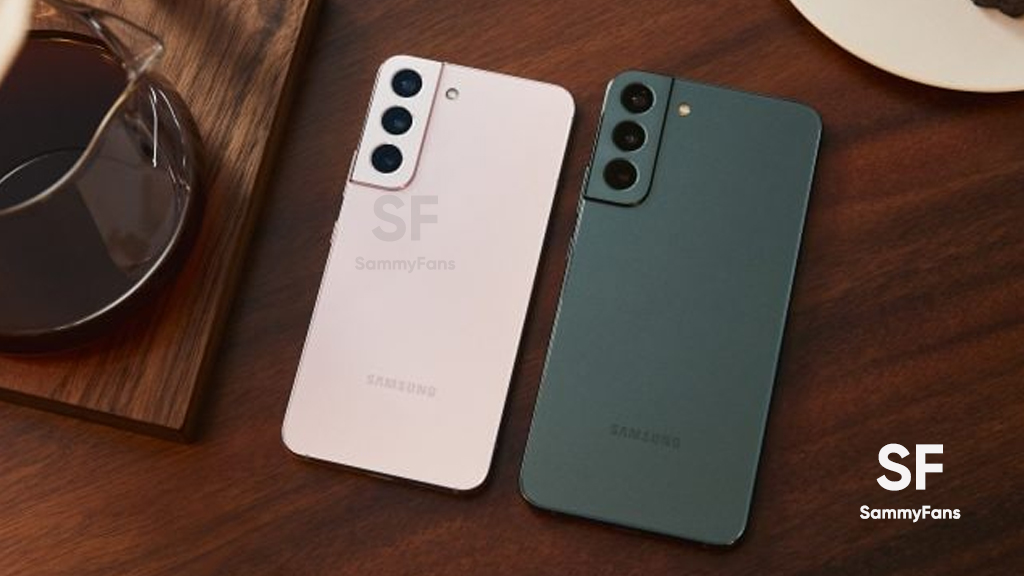 The blank screen issue has been fixed on some devices after upgrading to Android Auto version 7.7 or 7.8 as it restores compatibility between the S22 and various cars and head units. Meanwhile, some Galaxy S22 series smartphone users are still facing the same problem of Android Auto blank screen.

Seeing consumers’ reports, it looks like Google is required to work more on the Android Auto so it can be completely worthy with the Galaxy S22 series devices. Have you upgraded Android Auto to the latest version? Feel free to share the status of the issue through social media. 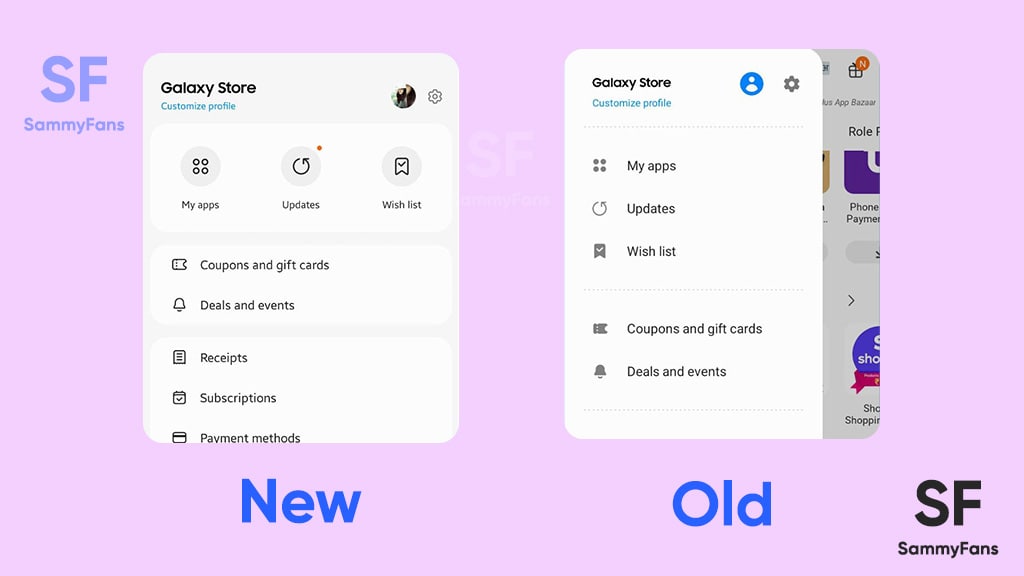 Galaxy Store! Yes, it is a platform to download various applications on your Samsung devices. The company keeps on enhancing this app by regularly bringing improvements, optimizations, and more but this time the company has made major changes through its new update for Galaxy Store.

According to the information, the Korean tech giant released a new update for Galaxy Store with version 6.6.09.9. This update completely changed the UI of the Galaxy Store, which is now more customizable and beautiful.

The latest update has replaced the Menu option (three horizontal lines) from the top left corner to the right bottom corner, which means that now you will see four options at the bottom which are Home, Exclusive, Games, and Menu. It seems like the search option has been deprecated. 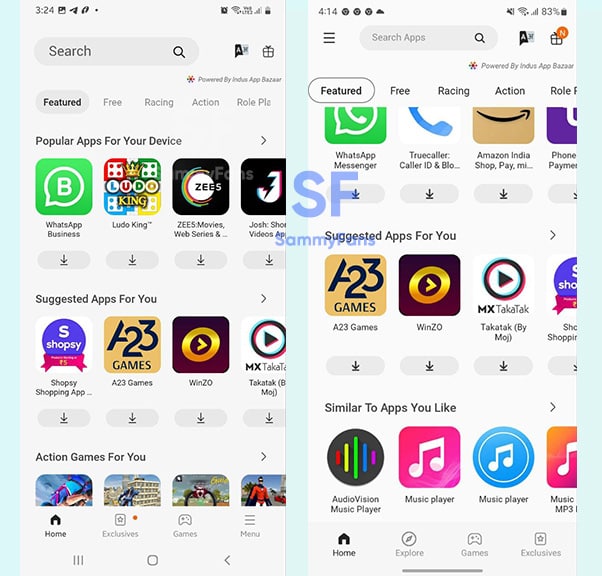 When we open the Menu option, now a full page opens. We can see that it has been completely redesigned, the options are the same, just the places have been changed to further customize the page.

The My Apps, Updates, and Wish List options are now placed horizontally on the page instead of vertically, as well as their icons are separately placed inside small circles, to make them look better and more beautiful. 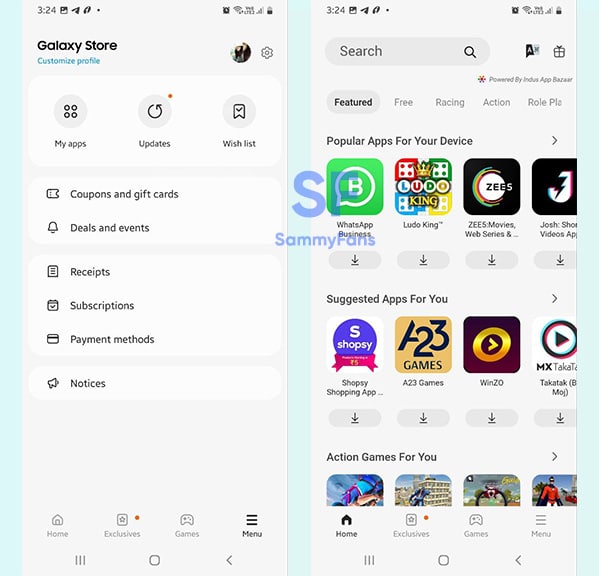 Samsung Galaxy Store 6.6.09.9 update has changed the logo of the subscription option in the menu list. All other options remain the same, just placed horizontally.

Users will have to download a 60.47MB package to install the Galaxy Store 6.6.09.9 update. If you have received this update, then you can tell us in the comment section.