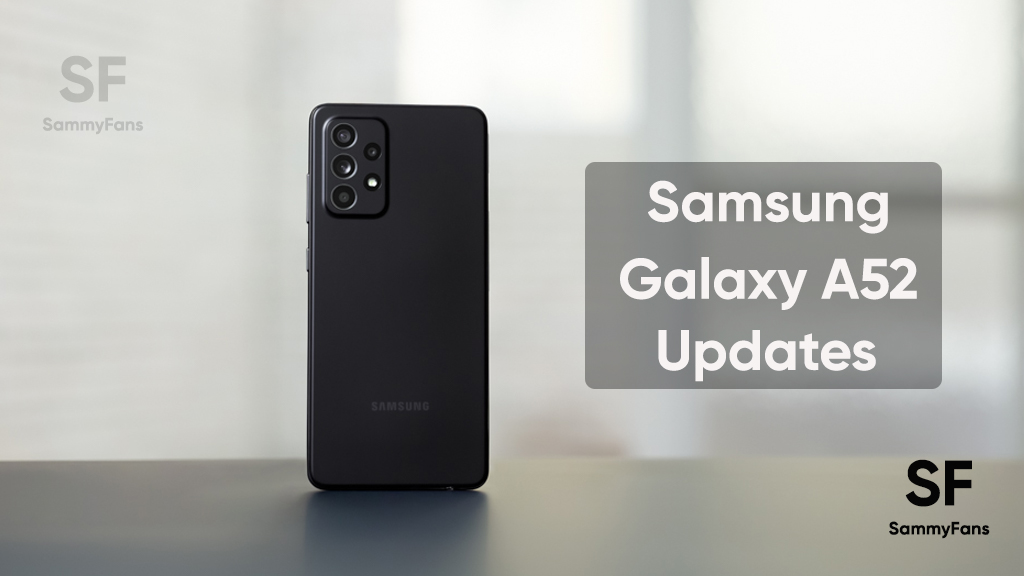 Samsung launched a new mid-range smartphone Galaxy A52, back in March 2021. The phone is equipped with several high-quality hardware and software capabilities such as Snapdragon 750G processor, S-AMOLED display, IP67 rating for dust and water resistance, and more.

Besides, the handset came pre-installed with the Android 11-based One UI 3.0 software system out of the box.  Therefore, it will get major software upgrades up to Android 14. Also, this mid-range phone is also eligible for the monthly security patch update.

According to Samsung’s upgrade policy, Galaxy A52 phones will get three Android OS upgrades. It is worth mentioning that the Android 12-based One UI 4.0 is the first major Android Switch on the device.

In this article, we will continue to add all major and minor software updates for the Galaxy A52 device.

Samsung is releasing the June 2022 Android security patch update for the Galaxy A52 smartphone users in Malaysia. Besides improving system security and stability, this update also upgrades various stock apps to enhance the performance of the device.

The updated version is A525FXXU4BVE2. To check it, navigate Settings >> Software >> Download and install. Now follow the on-screen prompt to get access to the latest changes.

Samsung is expanding the June 2022 Android security patch update for the Galaxy A52 smartphones in Brazil. The update comes with better system security and stability.

In the meantime, it fixes lots of issues and exploits from Google and Samsung to enhance the overall device’s performance.

Samsung Galaxy A52 May 2022 update Brazil

Samsung May 2022 Android security patch update is rolling out for the Galaxy A52 smartphone users in Brazil. The update comes with improved system security and stability.

You can identify it through the One UI build version A525MUBS4BVD7.

Samsung is releasing the May 2022 Android security patch update for the Galaxy A52 LTE smartphone users in India. It enriches the complete system performance by fixing 7 Critical, 23 High, and 3 Moderate levels of CVEs.

The updated version is A525FXXS4BVE1. To be mentioned, the update has already reached European countries and will release to more users in the coming days or weeks.

Alongside, the update carries the December 2021 security patch, rather than the latest January 2022 patch. Anyways, this new patch brings better system stability as well as performance in the smartphone. To be noted, this latest update is currently available for Russian users, it may be soon released in more countries in the coming weeks.[via]

As per the latest information, the YouTube channel MoboNews has recently posted a hands-on video of the Galaxy A52 running the latest Android 12 OS. The published video reveals all of the features and functionalities that Samsung brings with its One UI 4.0 update to the Galaxy devices. [Read More]

Recently, there’s interesting news emerged for Samsung fans having the Galaxy A52, Galaxy A52 5G, Galaxy A52s, and Galaxy A72. According to information, Samsung has updated the specifications web pages of the above-mentioned devices with Android 12 marking, while keeping the Android 11 too. [Read more]

While the company is expected to release the stable Android 12-based One UI 4.0 update for these mid-range Galaxies in February 2022, the latest development of revamping webpages has been taken as the imminent arrival of the major Android 12 update.