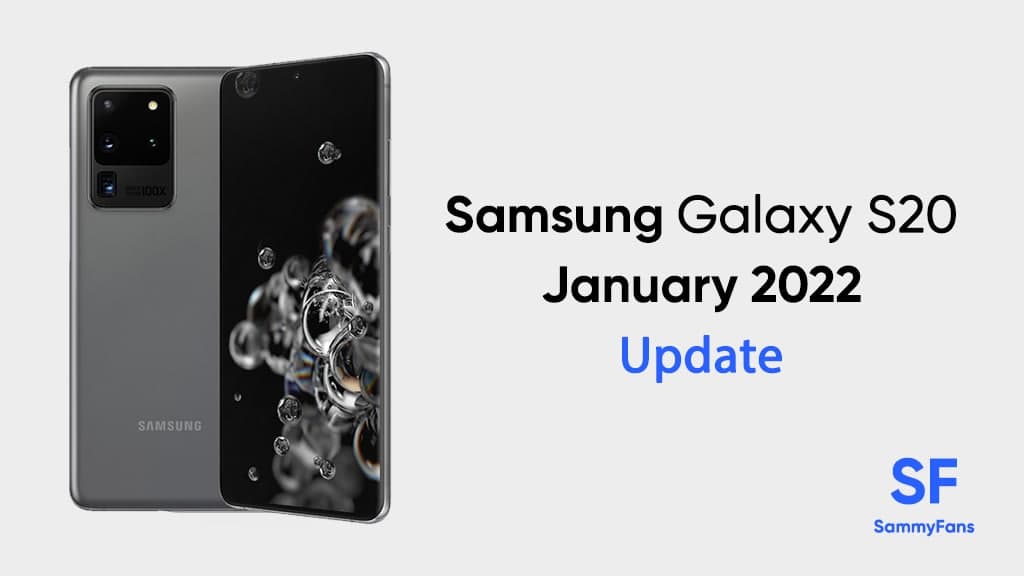 Samsung has just started rolling out the January 2022 Android security update for Galaxy S20 users in Brazil. The update enhances the security and stability of your smartphone alongside fixing several critical bugs to improve its performance.

You can identify the fresh software update for your smartphone through the One UI build version G981BXXSCEUL9, G986BXXSCEUL9, and G988BXXSCEUL9 for the S20, S20+, and S20 Ultra users respectively.

If you use a Galaxy S20 device in Brazil, you must have received the notification. If not then you can check it manually through Settings of your phone, then click on System updates and then the Download and install option.

Before you begin downloading the update, make sure to prepare a backup for your important data. However, this update will not move any of your files, we are just suggesting you have extra safety measures. Also, do start downloading it when your phone has sufficient battery.

A couple of days ago, Samsung started rolling out the January 2022 Android security update for its Galaxy S20, S20+, and S20 Ultra smartphones. Following the US markets, the update is now released for several other countries, mainly in Europe.

Samsung Galaxy S20 January 2022 update comes with the One UI build version G981BXXSCEUL9, G986BXXSCEUL9, and G988BXXSCEUL9 for the S20, S20+, and S20 Ultra users respectively. It improves the performance of the device by reducing system lag and fixing bugs.

Have you received Android 12 One UI 4.0 update on your Samsung Galaxy A52?

Samsung has recently rolled out the first Android 13-based One UI 5 Beta for Galaxy S22 in the US and other select regions. The Galaxy S21 customers are next in the queue to grab this update and can receive it anytime this month. Ahead of this, the Galaxy S21 owners are receiving the August 2022 update in the US.

Since it is just a security update, it does not carry any new features or major changes with it, however, there are fixes for various severe bugs that will further enhance your user experience. It should be mentioned that this update is released for the T-Mobile and Sprint-locked Galaxy S21 users while others will collect it shortly.

You can identify this update through the One UI build version G991USQU5CVGB, G996USQU5CVGB, and G998USQU5CVGB for the Galaxy S21, Galaxy S21+, and Galaxy S21 Ultra. And, to grab it, simply move to Settings >> Software update >> Download and install.

Samsung’s August 2022 security patch update for Galaxy S21 comes with improvements for system security and reliability so that users can effortlessly operate their phones and perform various tasks on them.

In addition to this, it also brings fixes for 1 critical and 23 high levels of CVEs from Google and 31 SVEs from Samsung in order to enrich the overall device’s performance. These fixed vulnerabilities are mainly related to Bluetooth connectivity, Samsung Dex, Samsung Dialer, Wi-Fi service, DesktopSystemUI, and more.

Besides these, there’s nothing that the latest firmware brings for the corresponding device owners. However, users will not have to wait for too long to get access to a handful of major changes as the One UI 5 beta is coming soon for these devices. 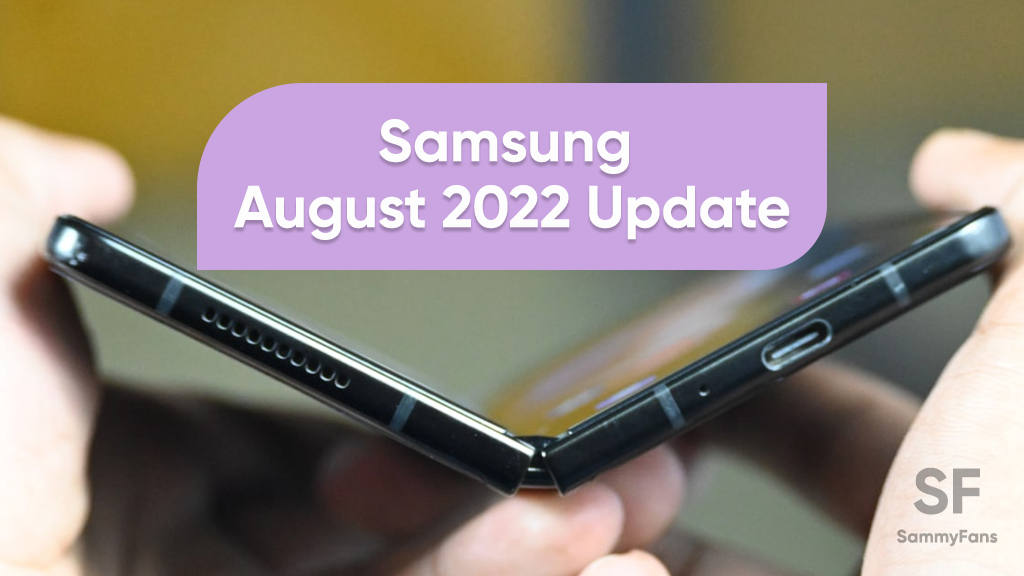 Samsung started releasing the world’s first August 2022 security update for Galaxy devices, when July was about to end. Similar to the past few months, the company has released the latest security patch first as compared to other OEMs. The latest update has firstly rolled out for Samsung Galaxy S22 series smartphones.

Shortly after the initial rollout with the Galaxy S22 series, the South Korean tech giant will gradually roll out the August 2022 security update to other Samsung devices that are eligible. The new patch surely fixes various vulnerabilities and bugs to enhance stability, security, and performance.

Previous reports suggest that Samsung has started testing One UI 5.0 beta internally. The company will soon begin the Android 13-based One UI 5.0 beta program for Galaxy devices. On the other hand, Google is ready to release the Stable Android 13 update, which may arrive later this month.

In this article, you can see which Samsung devices have received the August 2022 security patch, along with the region and updated version. 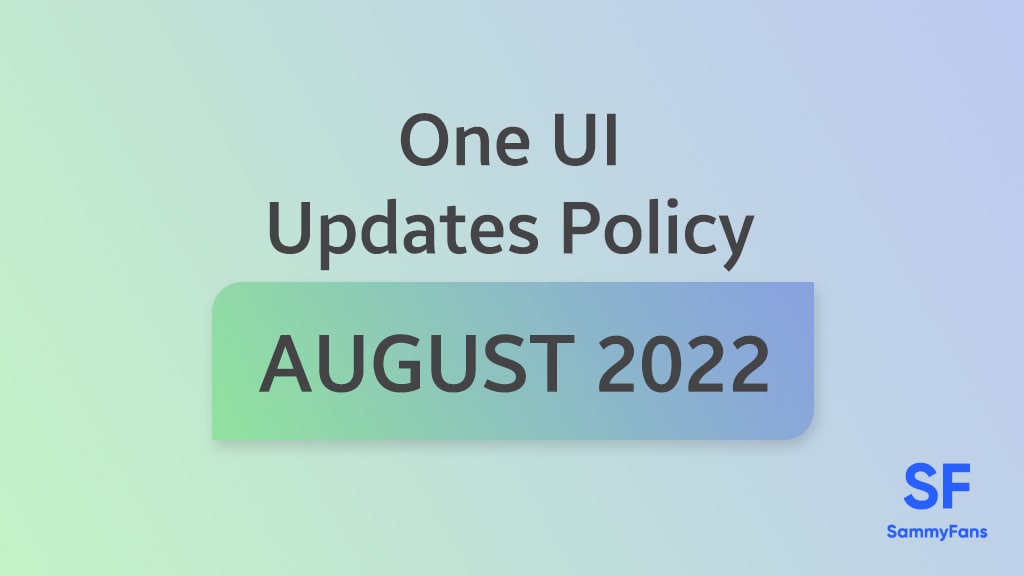 The South Korean tech giant delivers two OS upgrades to mid-range and budget devices, while 3 OS upgrades to select mid-range phones and four to flagships launched in and after 2021. Similarly, flagships are eligible for monthly security patches for up to five years, while others are on quarterly span for up to four years.

With the August 2022 One UI updates policy, Samsung shifted the Galaxy XCover 4s from monthly to quarterly and Galaxy A21 from quarterly to biannual. Moreover, the Galaxy A8 Star is no longer eligible for any more software update support from the company.

In addition to fixes from Google, the smartphone manufacturer pointed out that the August update for Galaxy devices comes with 31 Samsung Vulnerabilities and Exposures (SVE) items, which are described here, to improve the security and reliability of devices.

You can check the Monthly, Quarterly and Biannual Software updates policy below. 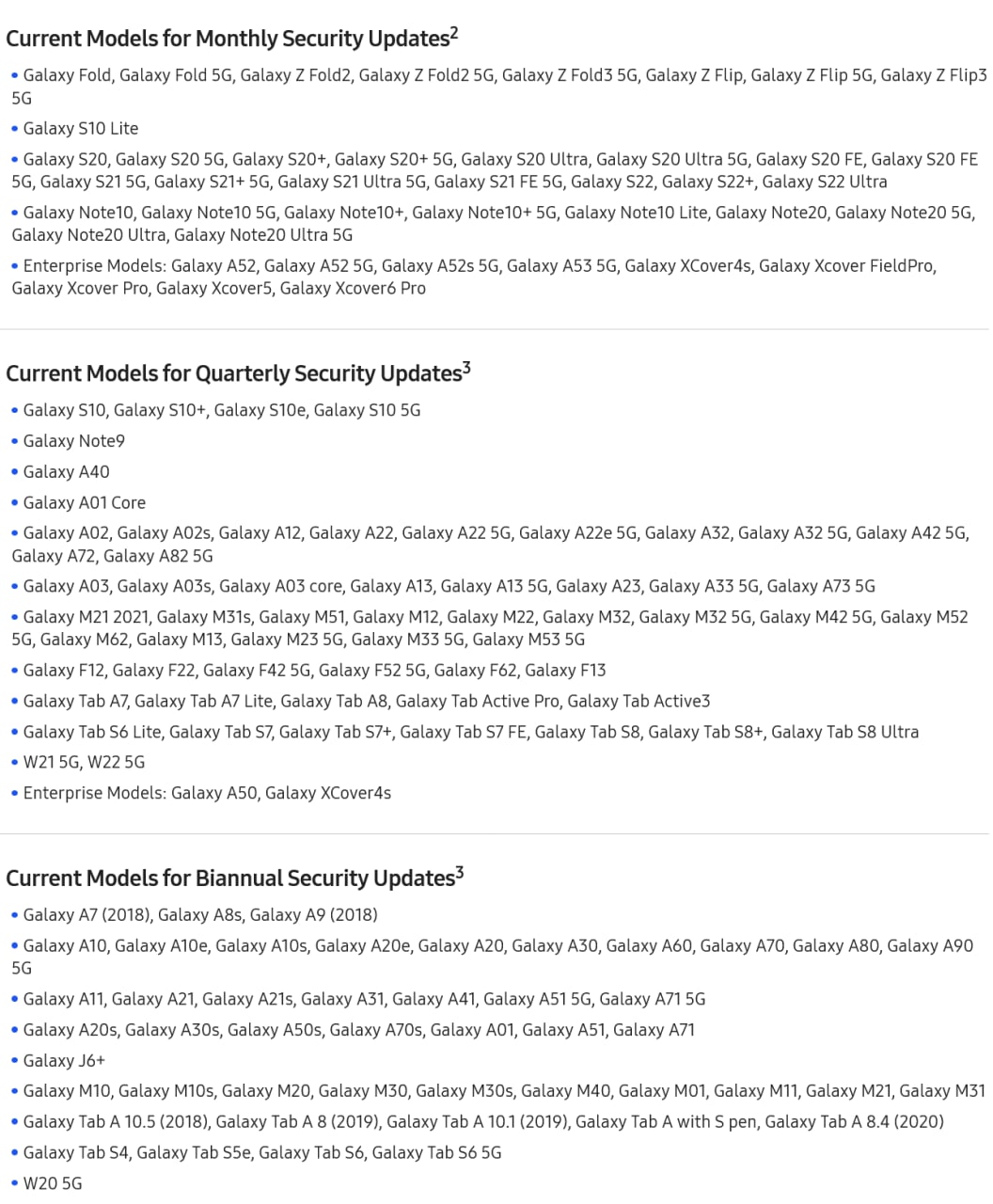