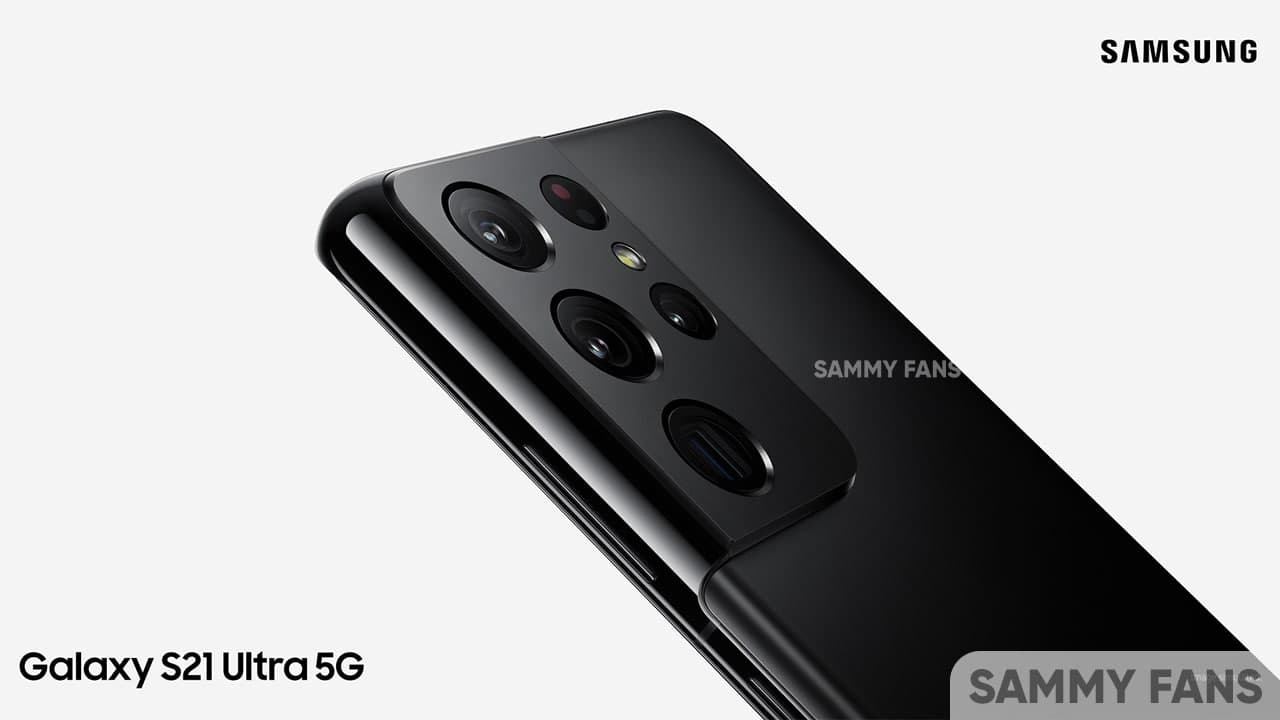 A few months back, Samsung camera person revealed that the engineers are working to introduce Pro Mode for Telephoto lens the flagship devices with powerful camera capabilities. According to the latest info, the company announced a pre-beta service for Galaxy S21 Ultra consumers that have received Android 12 One UI 4.0 update.

Thanks to the Expert RAW app that makes the addition of Pro Mode in the Telephoto lens of the Galaxy S21 Ultra possible. This function enables multi-frame-based raw shooting of all lenses (Wide/Tele/Ultrawide). However, the program seems to be limited to South Korea, but soon, it will be expanded to more regions. 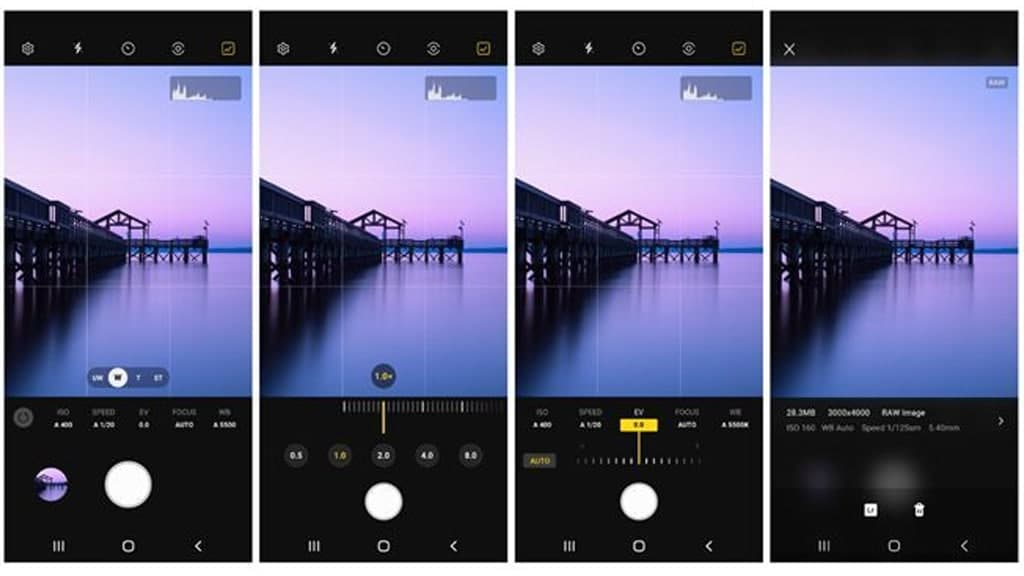 Samsung officials disclosed that the “Expert RAW” is a new camera app for Samsung Galaxy phones that is a downloadable application, allowing you to take high quality, high dynamic range photos in multi-frame raw format for professional shooting and editing.

If you have Galaxy S21 Ultra smartphone, then, you can get the Expert RAW app through Galaxy Store, also, tipster FrontTron brought a link to download the application, you can get it HERE.

Aperture telephoto lens has a wide angle of mobile devices, the minimum aperture of the ultra-wide-angle lens than four-fold to eight to more than double the level received is dark and small pixel size to accept the light is very low compared to the wide-angle lens.

With only the original raw data output from the sensor, its brightness and noise characteristics are weak, so it is not easy to use it for professional photography. Therefore, “Expert RAW” was prepared to reduce noise, increase sharpness and detail, and expand the dynamic range to capture more information from dark areas to bright areas in a single photo through multi-processing techniques. 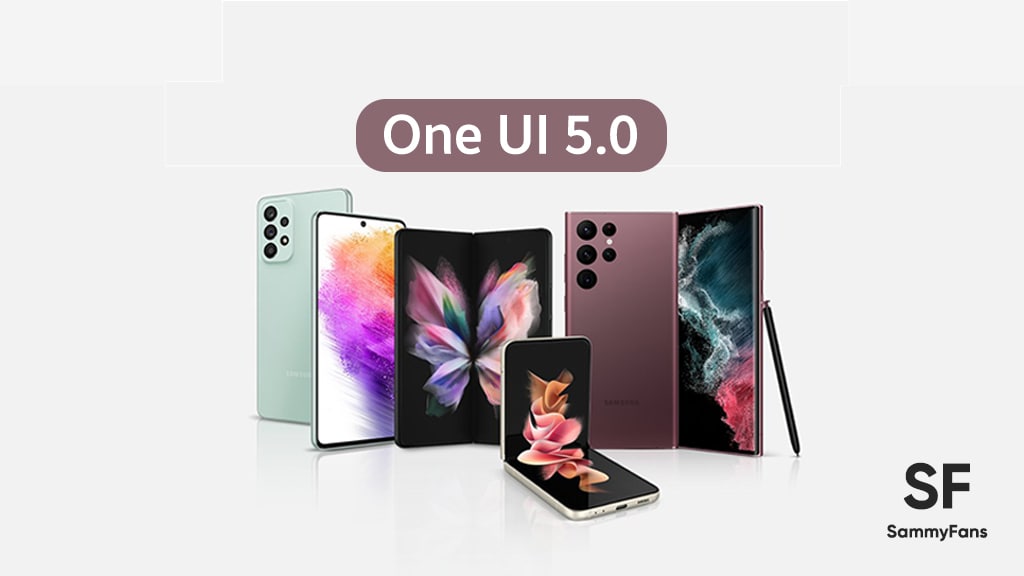 Looking for the Android 13 update information for your Samsung Galaxy smartphone, you are now in the right place. As Google made Android 13 official, we Samsung fans are now eagerly waiting for the One UI 5.0 upgrade.

We don’t have any Android 13 upgrade rollout plan or roadmap for Samsung devices, meanwhile, it’s likely to happen later this year, starting with the Galaxy S22 series flagships. 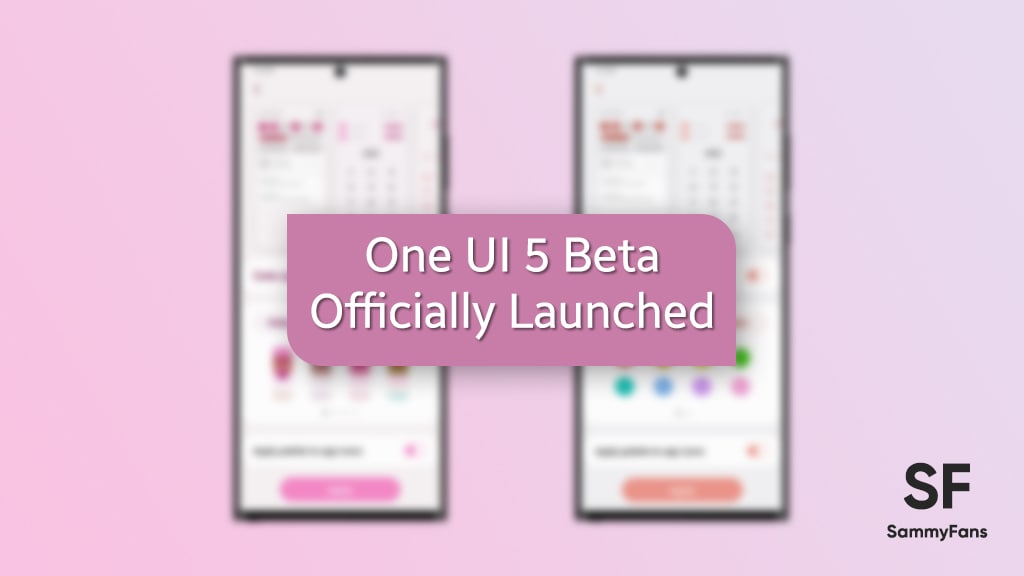 Starting September 26, Samsung is releasing the October 2022 Android security patches to Galaxy devices. So far, the Galaxy A52 users in India have received the latest security patch with firmware updates, however, you can check the updated devices that are mentioned here.

Samsung’s October 2022 security patch will be available for a lot of Galaxy devices, however, the company will continue to distribute this software update until the next two months due to a staged rollout strategy and updates eligibility.

Apart from this, the Korean tech giant is bringing up to 4 years of major Android upgrades to all flagships launched in/after 2021, which means, security updates will be available for one more year after major updates completion.

Similarly, Samsung is not bringing changes to the overall look of the One UI with the Android 13 upgrade for the Galaxy devices. For sure, the Stable version of the One UI won’t look like Google’s Android 13 operating system.

It’s expected that the final One UI 5 version, based on Android 13, will come with more meaningful design upgrades, improvements to the existing features/functions, new add-ons, better 3rd party app performance, and a lot more.

On August 29, Samsung expanded the Android 13-based One UI 5.0 Beta program in China.

On August 25, Samsung released the One UI 5.0 Beta 2 with new icons and more changes.

On August 7, Samsung officially unveiled the One UI 5 Open Beta for the Galaxy S22 series smartphone users. At the same time, the company showcased a handful of highlighting features of the new Android 13 upgrade.

Significantly, the South Korean tech giant has improved its software offerings for Galaxy consumers, which defeats Google itself. Well, Samsung officially disclosed which Galaxy devices will be getting four generations of Android upgrades that you can check below.

On August 15, Google has begun the Stable Android 13-based One UI 5.0 update rollout for Pixel smartphones worldwide. In addition to Pixels, the new OS is available for several smartphones from different OEMs via Stable/Beta.

And unquestionably, Samsung is running its independent One UI Beta program to let Galaxy users grow the new Android operating system as well as apps and new features optimization.

The latest flagship devices will be eligible for the Android 13-based One UI 5 Beta testing, while the company is also opening the Beta activity for mid-range Galaxy devices such as the Galaxy A52.

Samsung One UI Beta program is limited to seven markets including South Korea, the US, India, Germany, UK, Poland, and China. According to the info, Samsung will unveil the One UI 5.0 on October 12.

Google released the official Android 13 operating system for Pixel smartphones on August 15, 2022, however, Samsung can’t beat the US tech giant when it comes to the fastest Android deployment.

This year, things will be a lot better and we can surely assume that the Korean phone maker will amaze consumers with an even boosted Android 13-based One UI 5 update distribution for the flagship Galaxy devices.

Samsung might release the stable Android 13-based One UI 5.0 update to Galaxy S22 series devices in late October or early November, meanwhile, we are taking it as just a rumor until the vendor officially confirms. 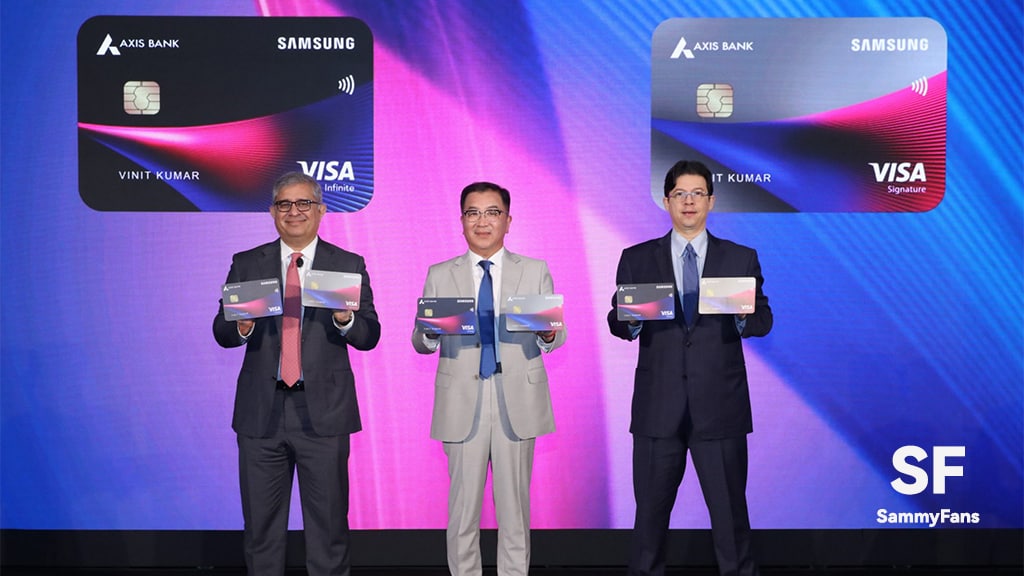 As an added pleasure moment for the consumers, the 10% cashback offer via Samsung Axis Bank credit card will be over and above the existing Samsung offers on both EMI and non-EMI transactions.

Samsung says the new Credit Cards are designed to reward consumers every time they use the card to purchase Samsung products and services. Consumers can get 10% cash back on purchases of products such as smartphones, tablets, laptops, TVs, refrigerators, ACs, and washing machines.

In addition, the 10% cashback is also valid on the purchase of other Samsung services including service center payments, Samsung Care+ mobile protection plans, and extended warranties.

On the Visa Signature credit card variant, cardholders can avail of up to INR 10,000 cashback annually, with a monthly cashback limit of INR 2500.

These customers can avail of up to INR 20,000 cashback annually, with a monthly cashback limit of INR 5,000. There is no minimum transaction value, which means cardholders can get 10% cash back on the smallest of Samsung purchases. 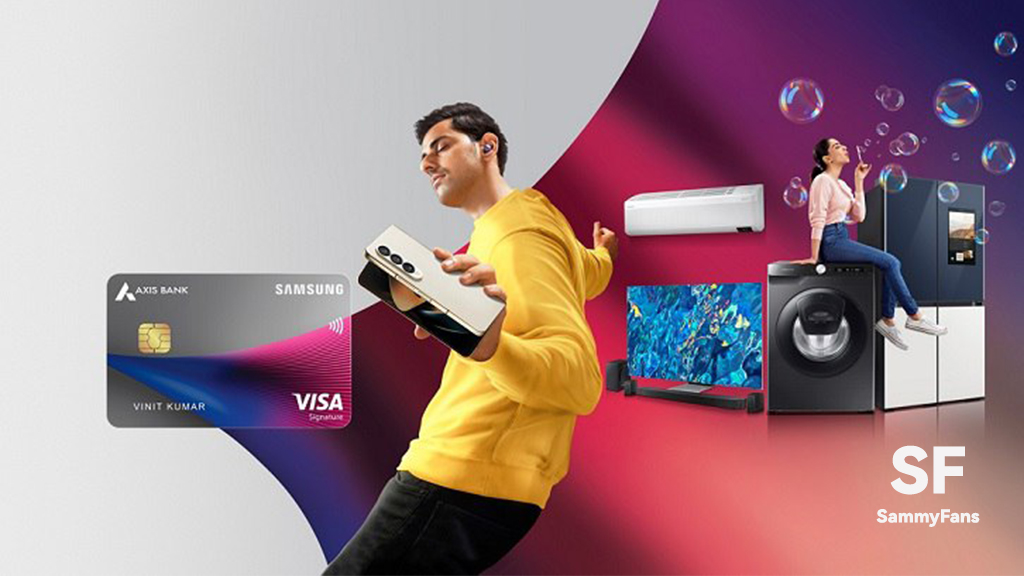 Furthermore, with consumer trends and preferences in mind, Samsung India and Axis Bank are partnering with industry-leading partners to provide cardholders faster rewards for their day-to-day spending with major partner merchants such as BigBasket, Myntra, Tata 1mg, Urban Company, and Zomato.

Samsung guides how to fix One UI Home crashing issue on third One UI 5.0 Beta 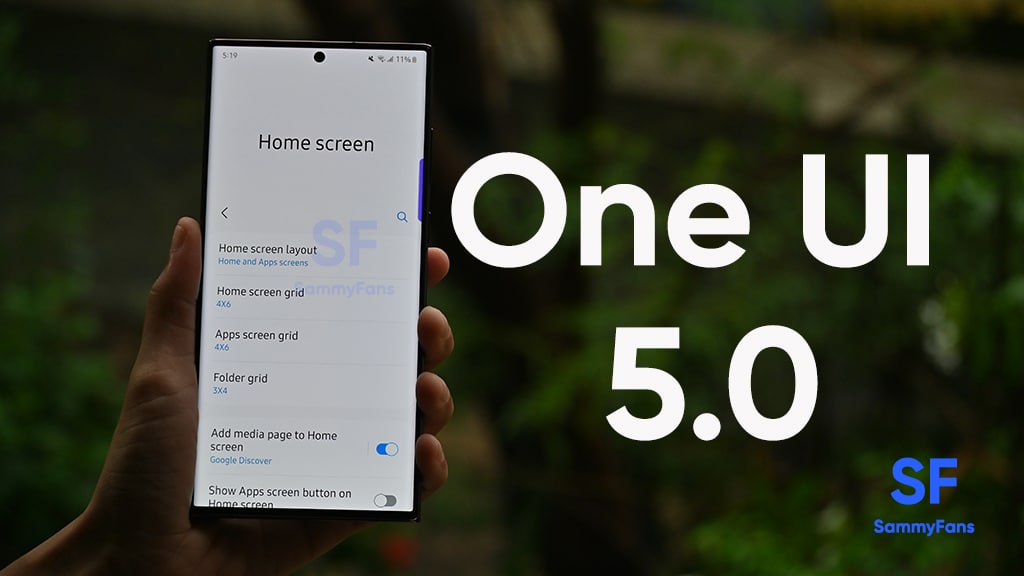 The Korean community’s moderator revealed that the One UI Home function is crashing because of the Good Lock’s Home Up module. To be specified, Galaxy S22 owners who use the Home Up app for homscreen customization are facing crashing issues with One UI Home after the third One UI 5.0 Beta installation.

Adding to this, the issues are not just limited to crashing the One UI Home as the homescreen folders are also behaving abnormally such as bouncing or not working on the first attempt. As of now, the company has just acknowledged the crashing issue, however, it will surely be fixed with Beta 4.

Meanwhile, the moderator shared a temporary fix for the issue through which you can get rid of the crashing error of homescreen. To do so, you will be needing to compromise with the Home Up app’s access for a few days as the moderator suggested to Uninstall the module.

After proceeding with Home Up uninstallation, you should reboot/restart your Galaxy device once for further system optimizations. In case the issue still persists even after uninstalling the Home Up module, owners are required to send the error log as the crashing reason may be something else then.

On October 12, Samsung will introduce the new Android 13-based One UI 5.0 version at the Developer Conference. And we are dreaming that the company will start releasing the Stable Android 13 update to the Galaxy S22 series devices sometime in mid to late October.