Adding to this, the average iPhone capacity reached 140.9GB in the fourth quarter of last year, which was a significant increase from 116.6GB compared to the previous quarter. It was happened because of the high sales of 256GB and 512GB iPhone 12 series.

Talking about Android, the average capacity of mobile phones has been growing rapidly over the years and has reached 95.7GB, which is very close to the goal of 100GB. The research shows that the average capacity has increased by 5.6% and 20.5% for the iPhones and Android phones respectively. 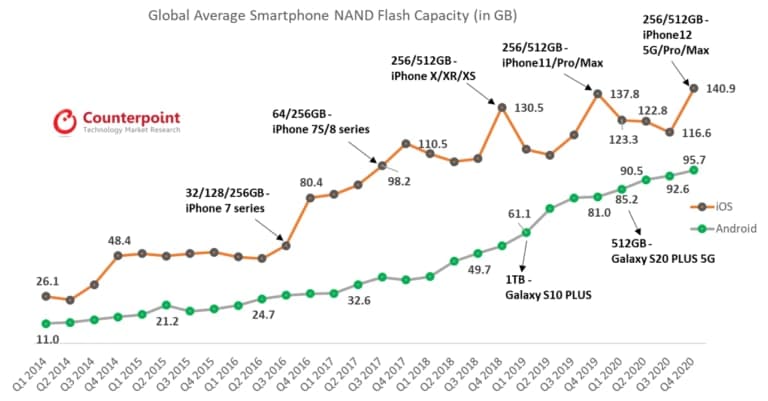 Counterpoint said that Apple has not introduced new storage scales, and the maximum capacity is still 512GB. The gap in storage capacity between Apple and Android is narrowing.

On the other hand, the biggest Android OEM, Samsung, looked to maximize its storage capacity and launched the Galaxy S10 Plus in 2019 with 1TB NAND. All this resulted in a lower storage growth rate for iOS compared to Android in 2020.

Although the price of NAND flash memory continues to decline from 2019 to 2020, the researchers said that the sales share of the 256GB and 512GB versions of the iPhone has not increased significantly, and the two will account for approximately 21.5% of sales in 2020.